Filipino Chicken – Can You Say Adobo? 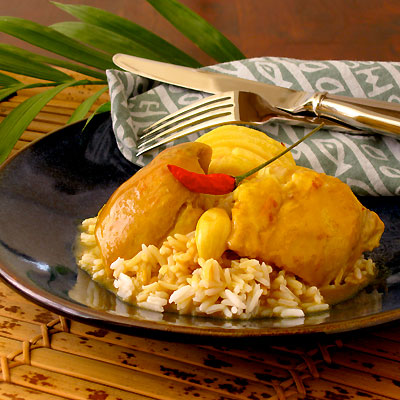 Do you read Oyster Food & Culture? Well I do. It is a “great place to exchange ideas and learn about culture through food”. Well recently, via an excellent post, OF&C made me realize that I know very little about Filipino food – how can that be? So I decided that not only was it time to remedy that, it was time to learn by doing!

I’ll start with this caveat. I am not Filipino. I may stick my foot in it once or twice here as I attempt to acquaint you (and myself) with a Filipino dish known as Adobo. I don’t know if the Philippines have an official national dish, but I can say Adobo must come close.

Adobo is not a recipe per se; it is a method by which anything– fish, fowl, vegetables or meat is marinated in vinegar, and spices. It is often braised and then browned in hot oil. Though some versions are finished under the broiler. Soy sauce may or may not be used. My version is made with boneless chicken thighs, but bone-in seems to be the norm. The dish is often garnished with an egg, but I did not know that when I prepared the version you see here. But I did serve it with rice, which is also very typical.

adobo prep at Sippity SupAdobo is a mingling of eclectic influences. Some regional– some imported. As the locals say, “Philippine food was prepared by Malay settlers, spiced by the Chinese, stewed by the Spanish and hamburgerized by the Americans”.

I think that may be partly a joke (especially the hamburger part) but it very clearly illustrates that Adobo morphed with the changing times and cultural influences that shaped the islands history.

I read that Adobo is a cousin to a popular Malaysian dish known as ginataan – chicken, pork and vegetables cooked in coconut milk and garnished with vinegar and garlic. But the main influences come from the Spanish who colonized and ruled the Philippines for more than three centuries. The Spanish most certainly introduced the locals to the idea of marinating, because before that almost everything was boiled. Some food experts say that as much as 80 Adobo prep by Sippity Suppercent of today’s Philippine dishes are derived from Spanish recipes.

That said, what makes Adobo truly Filipino however are its nearly limitless regional variations. Because the basic formula is easily enhanced, or if need be stretched by whatever is available locally. Variations of ingredients range from sugar cane to coconuts.

Despite all the regional variations, a few basic rules apply. Philippine vinegar, distilled from pineapple, sugar cane or coconut should be used whenever possible. But an acceptable substitution is cider vinegar. Purists insist that wine vinegar of any type cannot be used because it distorts the taste. The rice is an important component. It should be fluffy, never glutinous. It may be served plain or simply seasoned with garlic. Most of the versions I have seen include soy sauce. Mine does not because according to what I read at OF&C traditionalists “disavow soy sauce”.

Lastly vegetables are not to be served on the same plate as Adobo. They are said to “blur” the taste of the main dish. Though onions are an acceptably sweet exception to this rule. If you simply must have an accompaniment other than rice you may serve fruit. Pineapple and banana will certainly enliven the plate, but it seems that most Filipinos agree there nothing is better than a fresh mango.

I wish I had known that before I would have certainly included mango on my plate. 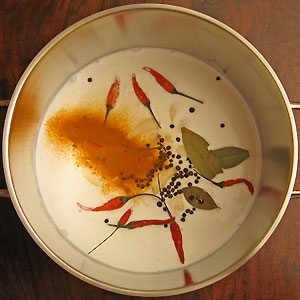 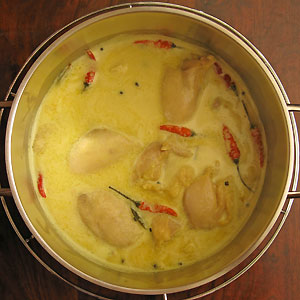 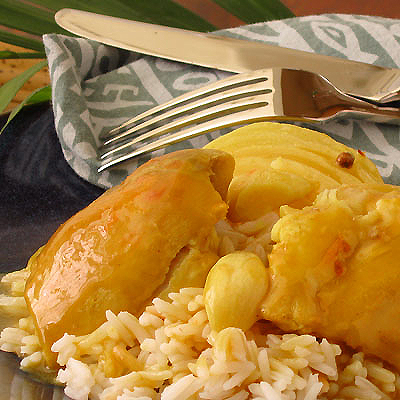 Arrange chicken and onion wedges in a clay pot or Dutch-oven. Pour marinade over chicken, and bring to a boil. Reduce heat; simmer, covered, until tender, about 30 minutes. Taste for salt and seasonings.

Preheat broiler. Remove chicken from pot, and place on a baking sheet or broiler pan. Place under broiler until browned, 5 to 10 minutes. Meanwhile, continue to cook the remaining liquid in the pot until it reaches a creamy consistency.

Prepare the rice to your liking. Fluffy with a bit of garlic is traditional.

Transfer chicken to a serving platter, and top with reduced sauce, and onion wedges. Serve with rice and your choice of garnish.