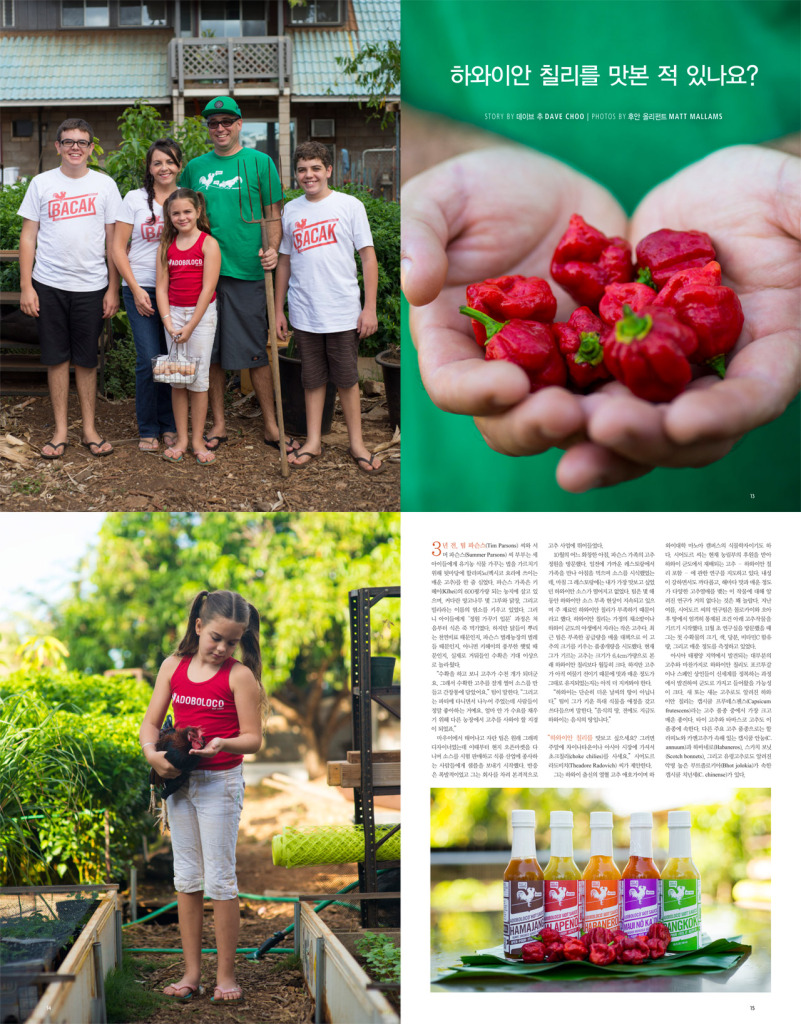 How exciting, we were just notified by Hana Hou magazine editors (Hawaiian Airlines inflight magazine) that they printed the article for the Korean version of the Magazine. Someday we’ll be able to go to Korea in person.

The Tropic of Capsicum

A little more than three years ago, Tim and Summer Parsons planted a handful of jalapeños in their backyard, part of a lesson in organic gardening for their three kids. The family lives on a half-acre of ag land in Kihei, home to a couple of massive mango trees, a chicken coop and a goat named Billy, so Gardening 101 was likely to be an easy A for the Parsons kids. Even so, what happened surprised everyone. It might have been the all-natural fertilizer provided by the dozen or so chickens or the worms in the family’s worm farm, or maybe it was Kihei’s abundant sunshine. Whatever the reason, the jalapeños went ballistic.

“We ended up with thousands of peppers, so I chopped them up, made a sauce and poured it into old shoyu bottles,” says Tim. “I took it to parties and people loved it. Pretty soon I had to start buying peppers from other farmers to meet the demand.”

The Maui-born-and-raised graphic designer tested the market at local swap meets and sent samples to food people. The response was overwhelmingly positive, so he took the plunge and named his company Adoboloco, after an adobo recipe blog he’d started years before. He created new sauces made with Hawaiian and Thai chili peppers, habaneros, incendiary ghost peppers and the volcanic Trinidad Moruga Scorpion pepper, the world’s hottest. His simple recipe (apple cider vinegar, sea salt, garlic and chilies) has earned Adoboloco a devoted following. Mainlanders appreciate Tim’s insistence on using only organic and locally sourced ingredients. Old-school locals like Adoboloco’s flavor profile— it’s similar to Hawaiian chili pepper water, a condiment that was once as omnipresent on Island tables as salt and pepper. Like chili pepper water, Adoboloco sauces are tart with plenty of heat, but the burn dissipates quickly, yielding to the flavor of the food. “It’s all about enhancing flavors,” says Summer, “not overwhelming them.”

I tour the Parsons’ pepper garden on a sunny October morning. Earlier I had met the family for breakfast at a nearby restaurant where I sampled several Adoboloco sauces over one of my favorite hot saucecompatible foods, corned beef hash with over-easy eggs. I really wanted to try their Hawaiian sauce, but the restaurant was out of it. Tim says that there’s a perennial shortage of Hawaiian sauce because there is a perennial shortage of its main ingredient: the Hawaiian chili pepper, a tiny dynamo growing in kitchen gardens and even wild throughout the Islands.

Tim’s trying to make up for the shortage by breeding his Hawaiian chili pepper plants to grow larger chilies. He’s been propagating seed from the largest chilies; those plants are now producing chilies that are about two and a half inches long, substantially larger than a standard Hawaiian chili. It’s his first crop and it’s not ripe, so he doesn’t yet know whether a bigger fruit comes at the expense of flavor or heat. As it stands, though, the Parsons’ backyard garden can’t keep up with the business, so Tim’s moved his chili growing operations to nearby Waihe‘e. He’s also working with a Big Island farmer to meet his pepper needs — all except for the Hawaiian chilies, which he’ll have to grow himself.

“No one grows them on a large scale that I know of,” says Tim. “They’re small so the labor costs are high. If you’re using a few for cooking, you don’t mind paying a premium price. But if you’re using them commercially, it can get expensive very fast.” According to Tim, it’s the high price —not changing tastes — that has led to the disappearance of chili pepper water from local cuisine. But if his jumbo pepper packs a strong enough punch, he’ll send the seeds over to his grower on the Big Island, and just maybe a much-loved Island flavor will be reborn. As hot as his sauces can be, his Hawaiian sauce is more about honoring tradition than blowing off heads.

“You want Hawaiian chilies? Go down to Chinatown on a weekend or any Asian market. Got choke chilies there,” says Theodore Radovich, a devoted chili-eater and University of Hawai‘i at Manoa botanist who was born and raised in Hawai‘i. Radovich is heading a state Department of Agriculture-funded study of chili peppers grown in the Islands, including the Hawaiian chili. Surprisingly little is known about this resilient but finicky plant, the fruit of which can vary in flavor and pungency (i.e., spiciness) from one growing season to the next. Last summer Radovich’s team started growing chili plants under controlled conditions on Moloka‘i and O‘ahu. When I visit his lab in early November, he’s testing the first crop for size, color, sugar, vitamin C levels and, of course, heat.

Like most chilies found in the Pacific and Asia, the Hawaiian chili was likely introduced to the Islands by Portuguese or Spanish traders, who discovered it in their conquest of the New World. The Hawaiian chili, also known as the bird or bird’s eye chili, is the largest and hottest variety of Capsicum frutescens, a species that also includes the Thai and Tabasco chilies. There are two other important species, C. annuum, with varieties like jalapeño and cayenne, and C. chinense, which includes habaneros, Scotch bonnets and the infamous bhot jolokia, or ghost chili.

Peppers get their heat from capsaicin, a chemical the plant produces to deter insects. Heat levels are measured in Scoville heat units, or SHUs, which indicate how many parts of a sugar and water solution must be added to a dried pepper to neutralize its heat. Jalapeños average between 3,500 to 8,000 SHUs, Hawaiian chilies reach more than 100,000 SHUs while habaneros can top out at more than 300,000. At over 1,000,000 SHUs the ghost chili was long thought the world’s hottest, but in 2012 The Guinness Book of World Records appointed the Trinidad Moruga Scorpion as the new king of pain, with more than 2,000,000 SHUs. Pure capsaicin, for comparison’s sake, rates a thermonuclear 16,000,000 SHUs.

Radovich introduces me to JP Bingham, an assistant professor at UH Manoa’s Department of Molecular Bioscience and Bioengineering. He’s an expert on mollusks and their toxins and has done some groundbreaking work on using those poisons to relieve pain. Bingham doesn’t know much about plants, but his mass spectrometer can quickly analyze a substance’s chemical composition. Today he’s measuring the capsaicin levels of Hawaiian chilies at various stages of ripeness. Archana Pant, a postdoctoral researcher, is gingerly grinding up chilies and placing them in glass vials.

“We work with toxins all the time, and I can honestly say that we handle chilies more carefully than we do those poisons,” says Bingham. “You usually have to ingest or inject a poison for it to do harm, but with chilies all you need to do is get a little of that juice on you and it’s over.” Bingham explains that capsaicin is easily absorbed into the skin and is not water-soluble, so it’s hard to wash off. It tricks nerves into thinking that they’ve come into contact with something hot, setting off the body’s fire alarms. Repeated exposure to high levels of capsaicin deadens the tongue’s receptors—basically it kills the taste buds —so people who eat a lot of spicy food can handle more capsaicin. To feel the same level of heat, the pepper fan must eat ever-larger doses of capsaicin. That’s in part what’s driving the hot sauce market’s quest for hotter and hotter chilies. The damage can be reversed, though; taste buds can “reset.” Pant herself is from Nepal, a chili-loving country. She gave up chilies when she got pregnant and was later upset to discover that she’d lost her tolerance. Several years and many chilies later, though, she’s back on the hot sauce.

Radovich’s research aims to boost the Hawaiian chili’s commercial viability. For now it’s a specialty crop grown mostly by Southeast Asian small farmers, who also cultivate a few Hawaiian or Thai chili plants alongside their bitter melons and bok choy. Radovich says he has no hard statistics on how many farmers are growing chilies or how much they produce, but he wants to see both numbers increase. And not everyone knows exactly what a Hawaiian chili is — they’re hard to distinguish from Thai chilies. “There’s a big market out there, and Hawai‘i can establish its own niche,” says Radovich. “But there’s a lot of confusion, and we’re hoping to provide clarity to both farmers and consumers — basically, we are trying to define what makes a Hawaiian chili Hawaiian.”

Radovich’s team isn’t merely trying to define the Hawaiian chili; it’s trying to improve it, make it bigger, better, badder. Bingham points admiringly to a tiny, fire engine-red Hawaiian chili hanging from a plant in the lab. “Can you imagine if we can develop a chili that has the size of a jalapeño but the heat of a Hawaiian?” “God forbid,” I reply.

Excerpt from the original article in Hana Hou Magazine