From a secret of the Americas to a global phenomenon, via conquistadors, traders and dead dogs: Market Life editor, Mark Riddaway, looks at the rich history of the chilli pepper

The story of the chilli is the tale of one of the most extraordinary acts of globalization ever seen in the pre-industrial world. Like a spicy version of Gangnam Style, the chilli swept around the entire globe at an eye-watering pace—over the course of just a few decades at the start of the 16th century, long before motorized transport and electronic communications, this pungent South American fruit left the Americas for the first time and established itself as far afield as sub-Saharan Africa, Persia, Japan and Indonesia.

Wild capsicums are believed to have first evolved in either Bolivia or Brazil, before spreading and diversifying, carried off by birds and humans. The earliest evidence of the cultivation of chillies dates back around 6,100 years, found at two sites in southwestern Ecuador. By the time the first Westerners arrived in the Americas, five different species and dozens of cultivars were being regularly consumed across South America, Mesoamerica and the Caribbean.

The first documented encounter between Europeans and chilli peppers came in 1492 when Christopher Columbus, sailing in search of the spice islands of Asia, accidentally discovered the New World. So forthright was he in his refusal to accept that he’d failed to make it to the pepper plantations of India, he named the people he found ‘Indians’ (indios) and the pungent spice they used ‘pepper’ (pimiento), thus beginning centuries of confusion: peppers and pepper are in fact completely unrelated.

On his second voyage, which set off in 1493, Columbus brought with him a doctor, Diego Alvarez Chanca, who provided the West’s first written account of chillies, using the native Arawak word ‘aji’. These were, he wrote, employed “to give a sharp taste to the fish and such birds as they catch”.

A bad chilli seller sells, among other abominations, “flabby chillies” and “chillies without heat”.

Spanish adventurers were the first to bring chillies to Europe, where they were treated as an interesting novelty, grown in monastery gardens. But it was the Portuguese who kicked off the rapid dispersal of this fiery fruit and changed global cuisine forever. Chillies proved to be a perfect form of tradable produce—they dry well, their seeds remain viable for long periods, they grow in a wide variety of conditions, they’re robust and reliable, and they taste amazing. Chillies can turn the food of poverty—rice, pulses, beans—into a festival of flavors, and at minimal cost. Compare the lazy growth of a chilli plant with the effort that goes into cultivating pepper or saffron and it’s easy to see the appeal.

In the 15th century, Portugal had established a number of lucrative slave trading posts along the West African coast. As the country’s presence in Brazil, particularly the chilli-rich region of Pernambuco, became firmly established, chillies began to play a part in this transatlantic trade. Portuguese traders brought chillies to Africa, and they spread rapidly along the slave routes which stretched far into the interior, readily embraced all across the continent by cultures already used to the pleasures of spicy foods.

Similar propagation—with the Portuguese introducing the seeds and local traders then dispersing them rapidly through existing markets—also took place in Indonesia and India. By the middle of the 16th century, chillies were being consumed in Goa under the name of ‘Pernambuco pepper’. China joined the party without any obvious help from the Portuguese—chillies appear to have arrived in Hunan and Szechuan via established trade routes from India and the Middle East. 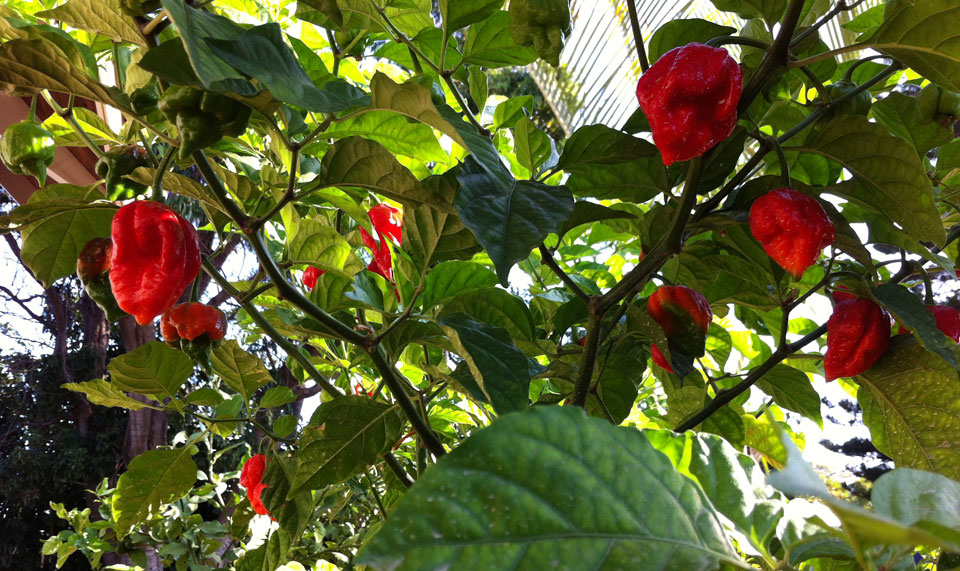 Within five decades of Columbus first arriving in the Caribbean, the chilli was well on its way to world domination. Asia and Africa rapidly accommodated the chilli into local cuisines, a fact that is abundantly clear from the briefest appraisal of Indian, Thai, Korean, Hunanese, Nigerian or Persian cookery. The Mediterranean countries were also keen, with chillies soon playing a supporting role in the cuisine of Spain, Portugal and Italy. Eastern Europe succumbed too. Paprika, the defining flavor of Hungarian cuisine, was being used in Hungary by 1569, with the chillies likely to have been introduced by Ottoman traders who brought them from India. Only northern Europe resisted the charms of the chilli, for a while at least.

One of the most comprehensive early accounts of the chilli in England came in the Herball of John Gerard, written in 1597. Chillies are, he writes, known in English as “Ginnie pepper and Indian pepper”. Chillies are, writes Gerard, “brought from foreign countries, as Ginnie, India and those parts of Spain and Italy, from whence we have received seed for our English gardens” and are “very well known in the shoppes at Billingsgate”. It is clear from Gerard’s account that this fruit is valued more as an interesting addition to the garden than as an actual foodstuff. “In Spain and sundrie parts of the Indies they do use to dresse their meate therewith,” he writes, but he doesn’t recommend trying it. “It hath in it a malicious quality,” he writes, before presenting the suggestion that “it killeth dogs”.

Botanist Nicholas Culpeper, writing about 50 years later, is similarly dubious as to the chilli’s appeal. They are, he writes, “of a fiery, sharp, biting taste, and of a temperature hot and dry; they are so hot that they raise a kind of blister in the mouth and throat, or other part of the skin if the seed or husks be used alone; the vapour from them occasions sneezing, coughing or even vomiting.” On the plus side, he lists a monumental list of medical benefits. Chilli cures everything from dropsy to labour pains. It even “takes away freckles”. Perhaps most extraordinary is his claim that chilli “drives away wind and helps flatulence”—a suggestion easily refuted by the consumption of a vindaloo.

Even the stew-and-dumplings loving Brits couldn’t hold out for long. By the 18th century, cayenne pepper had begun to pop up in English recipes such as potted shrimp and deviled kidneys, and British colonization of India made the use of chilli increasingly commonplace.

One of the results of the sheer rapidity of chilli’s conquest of the world was the vast level of ignorance that endured as to its birthplace. For centuries, even in learned circles, most Europeans considered it to be Asian or African in origin. Not until 1868 did Augustin de Candolle write a treatise that proved beyond question that chillies originated in the New World. This South American fruit sparked a global culinary revolution, but South America seems to have taken very little of the credit.